You are here: Home1 / projects | проекты2 / Mini and Mickey, Worker and Farmgirl 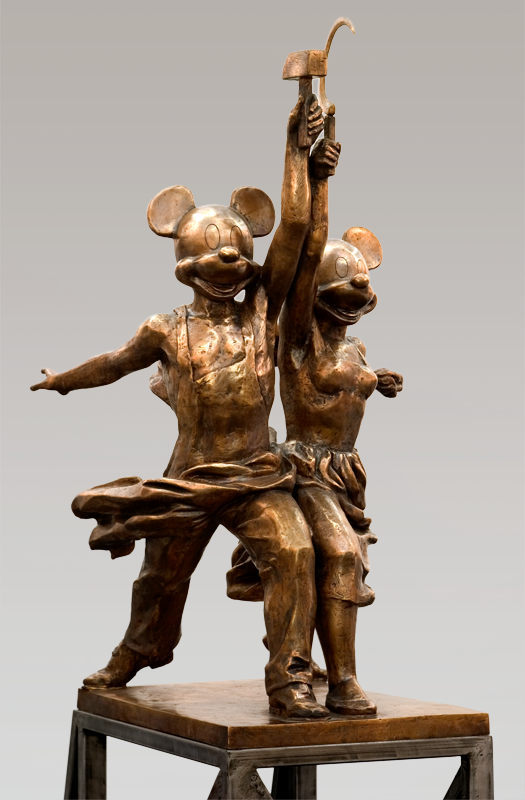 A trend of destroying monuments to totalitarian culture started in the nineties years of the last century. I offered a concept of saving those sculptures by inserting them into the new social and esthetic context.

In order to give them a new meaning I decided to put latex masks of commix heroes and other personages of pop culture on the heads of the existing monuments. It was then that I made the first sculpture of “Mickey-Lenin” (20 cm.). Twelve years later after my returning to Moscow art life I started to make big sculptures.

The stylistics of the totalitarian epoch attracts me and I want to save this exact language. My version of saving monuments to totalitarian culture lies at the root of this project and the previous one. Synthesis and eclectic coexistence of different stylistic forms and languages are possible in postmodern. This is precisely why the development of this art project was interesting for me.

I had to sculpture the statue “Worker and farmgirl” using a hundred and fifty cm version of the sculpture by Mukhina from the vault of the State Tretyakov Gallery. After making the sculpture I could hardly insert Mickey and Mini’s heads into this composition. It was especially difficult to combine different in language elements into the united plastic ensemble. And the experiment has answered.

The photo of the sculpture was published in “La Mond” magazine and in 2005 it was bought by a Moscow bank.

There will be an exhibition devoted to the creative work of Walt Disney in Grand Palais in September 2006. I am invited to take part in it with this sculpture. In 2005 “Mini and Mickey, Worker and farmgirl” was bought by “Ekaterina” Fund which will present it in the Paris Exhibition.

I express my gratitude to the people without whom the existence of this project would be impossible: Leonid Sokhranski, Vitas Stasunas, Simona and Viacheslav Sokhranski, Orekhov’s workroom and its craftsmen.