You are here: Home1 / critique | критика2 / See the Most Controversial Depictions of Jesus in Art

Although one can’t really be blamed for thinking that Christmas is all about the mountains of gifts and food, the fact remains that this holiday is, in its origins at least, a celebration of the birth of baby Jesus (remember?) And, indeed, the figure of Jesus is a staple of art history. Although he was depicted along relatively similar lines over the course of two millennia, many contemporary artists have taken a more liberal (some say outrageous) approach to the task. artnet News brings you some of these controversial images, offering a spiky alternative to the usual nativity scenes. 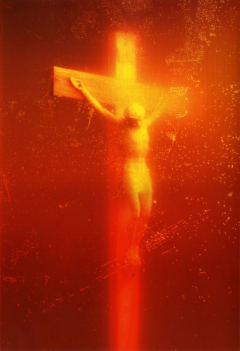 Serrano’s photograph of a crucified Jesus figure submerged in the artist’s urine has become an icon in itself. The history of the piece is plagued with controversy, starting in 1989, when the American Family Association and the North Carolina Senator Jesse Helms embarked on a mission (and succeeded) to slash the budget of the government-funded National Endowment for the Arts, a body which had previously given Serrano a grant. In 1997, while on display at the National Gallery of Victoria in Australia, Piss Christ was removed from the wall, kicked, and hammered, after the local Catholic archbishop failed to obtain a court order to stop the piece from being exhibited. In 2011, when the French Collection Lambert in Avignon showed the work, employees were greeted with death threats and the work, again, was hammered. More recently in Corsica, protestors stormed the museum where the piece was exhibited. 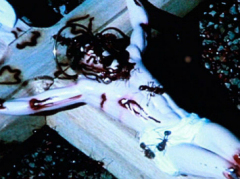 The same year that Serrano created Piss Christ, David Wojnarowicz presented the 8 mm film A Fire in My Belly, an exploration of the social response to the AIDS crisis, which contains an image of ants crawling over the bloodied statuette of a crucified Christ. In 2010, when the film was shown at the Smithsonian’s National Portrait Gallery as part of the exhibition “Hide/Seek: Difference and Desire in American Portraiture,” the Catholic League called the piece “hate speech” and Republican members of Congress deemed it a misuse of taxpayer money. The film was removed several months before the show ended.

The Argentinian artists Marianela Perelli and Pool Paolini caused a commotion a few months ago with their series “Barbie: The Plastic Religion,” comprising 33 sculptures that re-imagined Barbie and Ken dolls as religious figurines. The Ken version of Jesus on the cross in particular didn’t go down too well. The work was slated to go on display at POPA gallery in Buenos Aires in October. But the artists were threatened by Argentinian Catholic groups, and the gallery director, Marcelo Bosco, decided to cancel the show for security reasons.

During the 2012 New York Design Week, Gallery R’Pure held the exhibition “Love It or Leave It,” aimed at revisiting “the objects and symbols that have forged the American landscape through the eyes of their creators.” Chilean-born Errazuriz created 100 popsicles made of frozen holy wine­, which served both as artwork and as cocktail refreshment. For added authenticity, the popsicles had been smuggled into a church in a cooler and blessed inadvertently by the priest during the Eucharist. The sticks also featured Christ on a crucifix. The work, meant to address religious fanaticism, went on to be heavily criticized by the Catholic League, which called Errazuriz “a bigot, a hypocrite, and a rip-off artist.”

Ohlson Wallin created her photographic version on the Last Supper—with Christ in a woman’s dress and high heels, and cross-dressing Apostles with BDSM costumes—for an exhibition entitled “Ecce Homo,” which presented alternative takes on biblical passages. Presented originally in Stockholm in 1998, the show then toured through Scandinavia and central Europe until 2004. While it stirred up controversy wherever it went, its first appearance in Eastern Europe sparked particular uproar: religious activists took to the streets to protest against the display of the exhibit in Belgrade (Serbia), and around two thousand policemen had to be called in to avoid violence breaking out. Patriarch Irinej, the head of the Serbian Orthodox Church, called the work “blasphemous.” 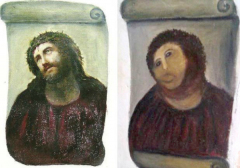 In 1930, García Martínez painted this fresco of Jesus crowned with thorns on the wall of the Sanctuary of Mercy church, in the Spanish town of Borja. The fresco had deteriorated significantly over the years when, in 2012, 80-year-old amateur artist Cecilia Giménez went out on an (unauthorized) limb to restore it. The “restored” painting became an instant Internet sensation, and was jokingly dubbed “Ecce Mono,” and “Behold the Money,” in reference to a BBC correspondent’s likening it to a “crayon sketch of a very hairy monkey in an ill-fitting tunic.” And yet, despite the general scorn, the hilarious phenomenon has attracted so much attention and tourism that it has in fact managed to regenerate the economy of the small rural town. 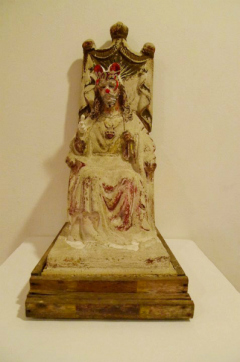 Cruz’s shrine-like installation, whose title translates as “polytheism,” was included in the 2011 group show “Kulo,” staged at the Cultural Center of the Philippines (CCP). Among the elements in the installation, which included a large red phallus adhered to a crucifix, the statue of Jesus wearing Mickey Mouse ears, entitled Poon, was particularly controversial. A Filipino television program deemed the show “offensive,” and public outrage—including threats to the artist—ensued. The CCP ended up shutting the show down. 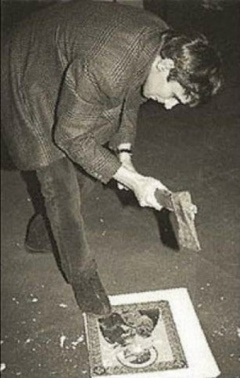 Ter-Oganyan’s performance in a public Russian square consisted of hacking a series of mass-produced Orthodox icons with an axe. In a surprising turn of events, Ter-Oganyan was stopped while performing and punched by fellow artists, who saw his work as offensive. He subsequently emigrated from Russia under the threat of a criminal case for “igniting religious hatred.”

Alexander Kosolapov, This Is My Blood (2001)

In January 2003, the Andrei Sakharov Museum in Moscow staged the exhibition “Beware, Religion!,” in which Kosolapov’s daring series of prints, which mixed pop art with religious imagery, was included. Curated by the director of the museum, Yuri Samodurov, the exhibition was meant to call attention to the prominent role of religion in dictating public taste in Russia. The exhibition was vandalized by Orthodox radicals and the state sided with them, even charging Samodurov with “igniting religious enmity” and causing him to lose his job at the museum. 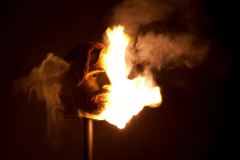 In 2011, David Mach created a head sculpture of Christ with matches. The sculpture’s ashen remains were displayed in an exhibition at Edinburgh’s City Art Centre, staged to commemorate the 400th anniversary of the King James Bible. While Mach had also included a head of the devil, which he planned to burn in an egalitarian gesture, the Scottish Christian Institute called the stunt “appalling.” 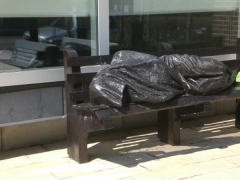 Not really a critique of Christianity, but still controversially received, was Timothy Schmalz’s bronze sculpture Homeless Jesus, which has toured around Canada, the US, and Ireland. Attempting to “visually translate the gospels,” the sculpture features Jesus asleep on a public bench and has been distributed worldwide with the help of an anonymous Episcopalian benefactor, who plans to gift 12 of the statues to cities around the world. While even the Vatican approves of the work, some residents of the cities where the sculptures have been installed found it disturbingly realistic (one resident in North Carolina mistook it for an actual vagrant), as well as an insulting depiction of Jesus. 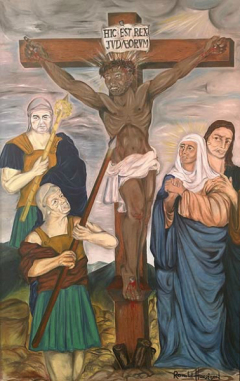 Inspired by the 1960 Sharpeville massacre, and challenging both the apartheid system and the ingrained notion that Christ was white, the South African painter Ronald Harrison created a very particular Crucifixion scene. He cast Albert Luthuli (president of the illegal African National Congress and 1960 recipient of the Nobel Peace Prize) as Christ, and the former Prime Minister Hendrik Verwoerd (considered as “the architect of apartheid”) and the former Minister of Justice John Vorster as Roman soldiers. After the painting was unveiled in 1962 at St. Luke’s Church in suburban Cape Town, Harrison was arrested and tortured by security police. The painting was banned in South Africa, smuggled into the UK, and returned back to its home in 1997. It is currently held in storage, with a replica on display at the offices of the Nelson Mandela Foundation. A 2007 proposal to permanently exhibit the painting produced public outcry. 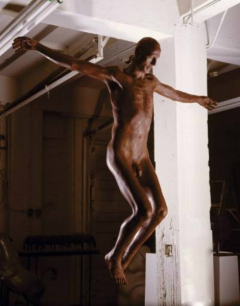 Made from more than 200 pounds of milk chocolate and standing six feet tall, Cosimo Cavallaro’s sculpture of Jesus, suspended and with arms stretched out as if on an invisible cross, was shown at Lab Gallery in midtown Manhattan during Holy Week in 2007. But after a group of Catholics called the work “a sickening display” and the artist received death threats, the Roger Smith Hotel, which houses the gallery, shut down the show, causing Matt Semler, the gallery’s creative director, to submit his resignation. The Catholic League also said the work was “one of the worst assaults on Christian sensibilities ever.”

The flip side of pop art