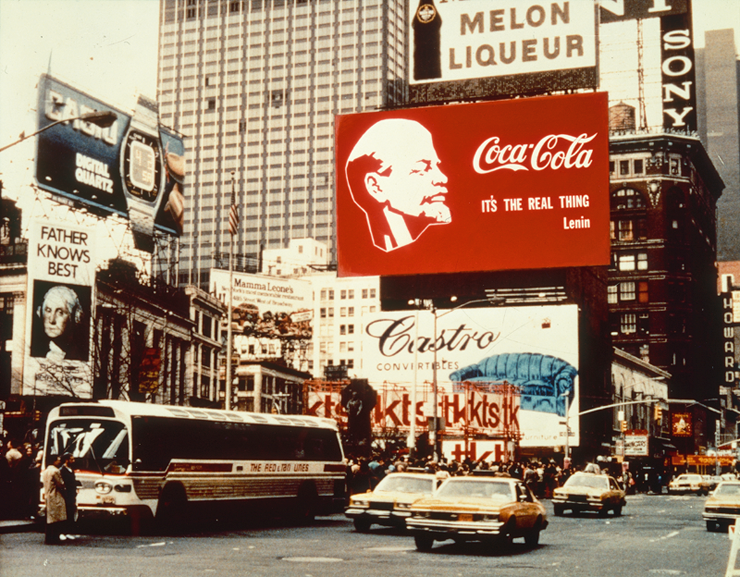 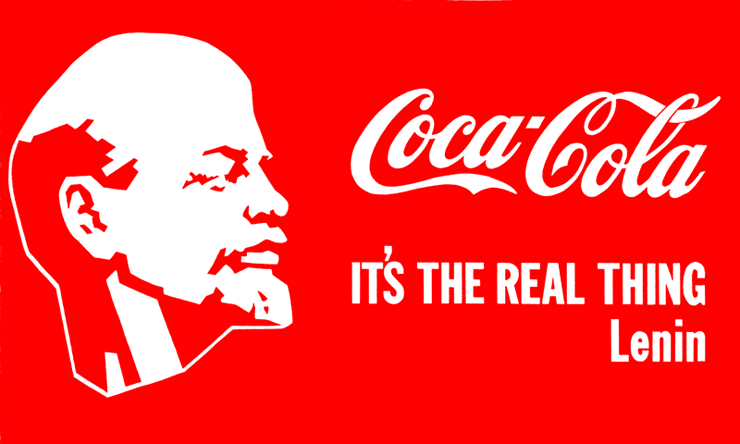 The Russians landed on the Moon and painted it red. Then the Americans came and used that red as a background for the Coca-Cola logo. I heard that joke when I was a child.

I designed the Lenin Coca Cola image in 1980. It was inspired by and addressed to the media. In 1982 it was put out as a postcard, printed first in Paris by Igor Chelkovsky. After that, I published my own edition of Lenin Coca-Cola postcards in New York. The same year I made my first silk screen print of the image.

In November Vladimir Kozlovsky showed the postcard to Richard Pipes, who subsequently brought it to the White House. The same autumn the Lenin Coca-Cola design served as a poster for the group performance of Kazimir Passion Play at The Kitchen Performance Center. The poster was seen all over SoHo and was used as a banner over The Kitchenis entrance.

On December 3rd, a man by the name of Jaques Lang who posed as an art enthusiast, invited himself to my studio. After viewing my paintings he abruptly introduced himself as a representative of the Coca-Cola company. He told me that an unauthorized use of Coca-Cola logo can result in a lawsuit against me. I saw that I violated the law. On the other hand these kind of laws were totally alien for me as a person brought up in a different world. But the tone of intimidation employed by my visitor was clearly familiar, reminding me the methods used in my old country. Overcoming the first fright I decided to defend myself. I tried to find a lawyer but soon realized I could not afford one. I was fortunate to have a friendly proposal of Ronald Feldman, who offered me a legal assistance by an attorney, Mr. Gerald Rosen, who defended Chris Berdan arrested by the FBI. Mr. Rosen argued that the Coca Cola is in fact a familiar street sign, which falls in the category of public domain, therefore any artist has the right to utilize it for his/her creative purposes. The Coca-Cola attorney maintained that this particular design hurts his company because it might instill in the American consumer the notion of Coca-Cola Co promoting communism. (I have always believed that people who are distant from the art have better understanding of it.)

Indeed, you can look at the design from the right and see Lenin as a sponsor of Coca-Cola or look from the left and see Coca-Cola as Lenin’s sponsor.

In 1982 I developed the project of a billboard for Times Square. Later, all my attempts to install a Lenin Coca Cola billboard did not succeed. In 1983 Public Art Fund rejected my proposal with the same response to it in 1985. Privately I was confided that rejection was based on the fact that Coca-Cola was the Fund’s sponsor.

In the Perestroyka time it seemed the situation in Moscow became favorable for my project. The Russian Museum was ready to spearhead itis fulfillment, and started to raise funds by first approaching the Russian division of Coca-Cola. The response was a prompt iNoi with a statement that the company has no money.

Since 1982 on, this work of mine has been one of the most frequently mentioned in the context of the contemporary Russian art.

Have you eaten caviar lately?
Scroll to top