You are here: Home1 / critique | критика2 / Alexander Kosolapov: back in Moscow 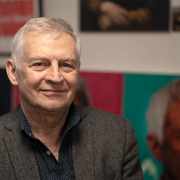 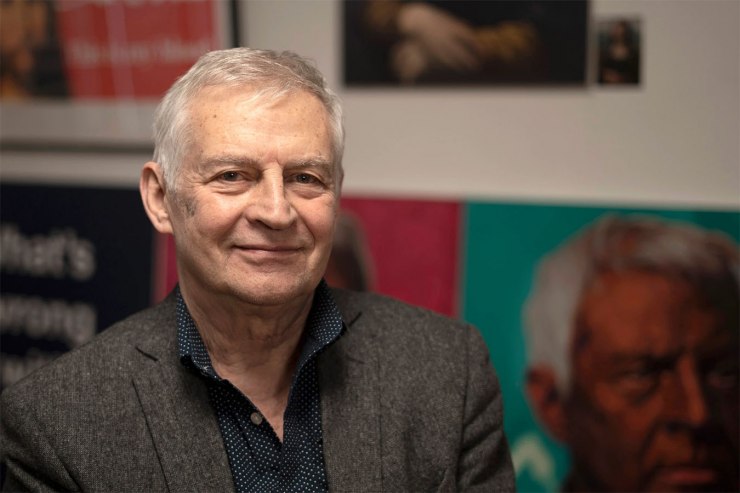 One of the founding fathers of the Sots-Art movement, known for his caustic comments on today’s society on both sides of the Atlantic, is about to unveil a new project in Moscow, once the pandemic-related regulations are lifted.

It is tempting to think of Alexander Kosolapov’s (b. 1943) career in two parts: his formative years in Moscow and his mature practice in New York, where he has lived since 1975. More accurate, however, would be to consider his art as the product of an intertwined existence between those anchors. This has allowed Kosolapov – perhaps more than any of his contemporaries – to consistently prick American, Soviet, and post-Soviet culture in just the most sensitive spots. Think caviar tins instead of Campbell’s soup cans, the Coca-Cola logo juxtaposed with Lenin’s profile and Suprematist compositions adorning a line of urinals.

The past months have been busy ones for Kosolapov. His first show of new works in three years, organized by the Moscow’s Syntax Gallery, was scheduled to open on November 18 at the Cube.Moscow art cluster. (It has since been postponed to January 2021, due to Covid-related closures.) When I visited him in the studio he maintains in Moscow, his bright canvases and prints felt especially sunny against the windows giving on a courtyard stained blue-gray by the November chill. In the corner of the room, I spotted a taped-up postcard that read “The Collapse of Capitalism is Inevitable”. 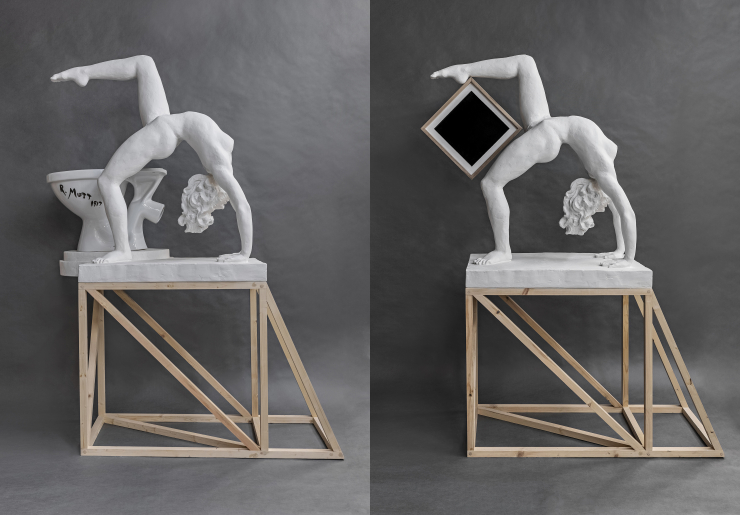 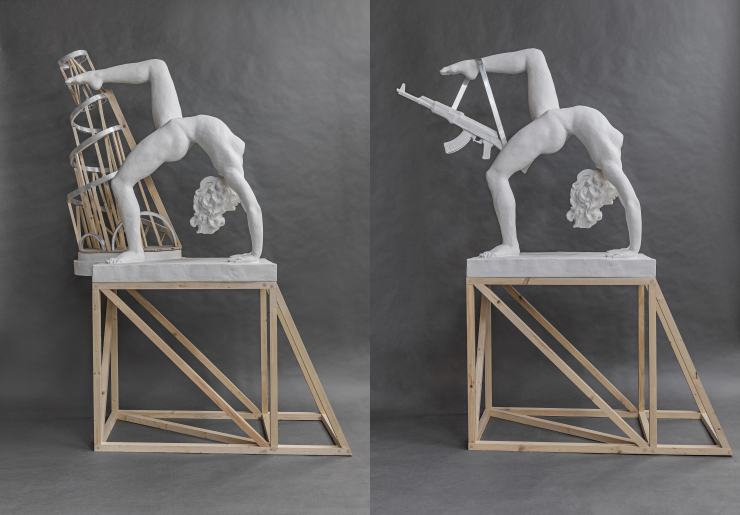 There were about a dozen artworks hanging on the walls or leaning against furniture, all created between 1975 and 2020. The earliest was ‘Sashok! Ty budesh’ pit’ chai?’ (“Sashok, do you want tea?”). It bears all the attributes of a Party slogan: a single phrase, the yellow font on a red ground, the profile of the phrase’s author, but one that has been relocated into the realm of the personal and domestic via an everyday question. One of his most recent paintings is ‘Mona Lisa L.H.O.O.Q’, where Kosolapov plays on Marcel Duchamp, an earlier master of wordplay and clever juxtapositions of text and image, by replacing the Frenchman’s Mona Lisa’s face with Vladimir Putin’s.

For an artist whose international recognition (or depending on your perspective, notoriety) thrives on his provocative wit, there is no hint of asperity in his manner. Kosolapov often spoke with a smile, choosing his words purposefully in both Russian and English. He showed me snapshots that he had recently taken of signs in New York. One that stood out to him also could be said to define what it means to be alive in America at this moment. Like Sashok, it too featured a single question: “What is wrong with my skin?”

An acute cultural and social observer, Kosolapov takes the phrases and images of mass culture and sifts them through his absurdly clever imagination. Much of his body of work hammers home the idiotic nature of ideology, whether it is America’s consumer society or Soviet political ideology. In the early 1970s, with fellow Sots-Artists Vitaly Komar (b. 1943) and Aleksandr Melamid (b. 1945), Kosolapov began revealing the emptiness of Soviet stock images and phrases. “We were like an escalator, moving and working next to one another,” he said of his Non-Conformist colleagues. But works like ‘Lenin Coca-Cola’ (1980) went a step further to point out that both American and Soviet societies relied on a similar set of superficial visuals to make sure their citizens didn’t have any critical perspective. The Coca-Cola Company made this point for Kosolapov in 1982, when it sued the artist for allegedly advertising Communism along with their product. I have long wondered what, if anything, lies behind the smiling faces, shiny surfaces, the seeming triviality of the images that constitute his art. Is it disillusionment with society? Or is there hope in the possibility of awakening from collective delusions? “In my work, I try to bring in irony. Even if you cannot improve reality, you can have your own criticism and sense of irony,” he said. “Living in the Soviet Union, I had an experience of ‘awakening’ in a totalitarian system that was trying to bend the human mind towards a particular ideology. When I arrived in New York, I realized that a similar kind of brainwashing was also at play in the consumer society, trying to change reality.” 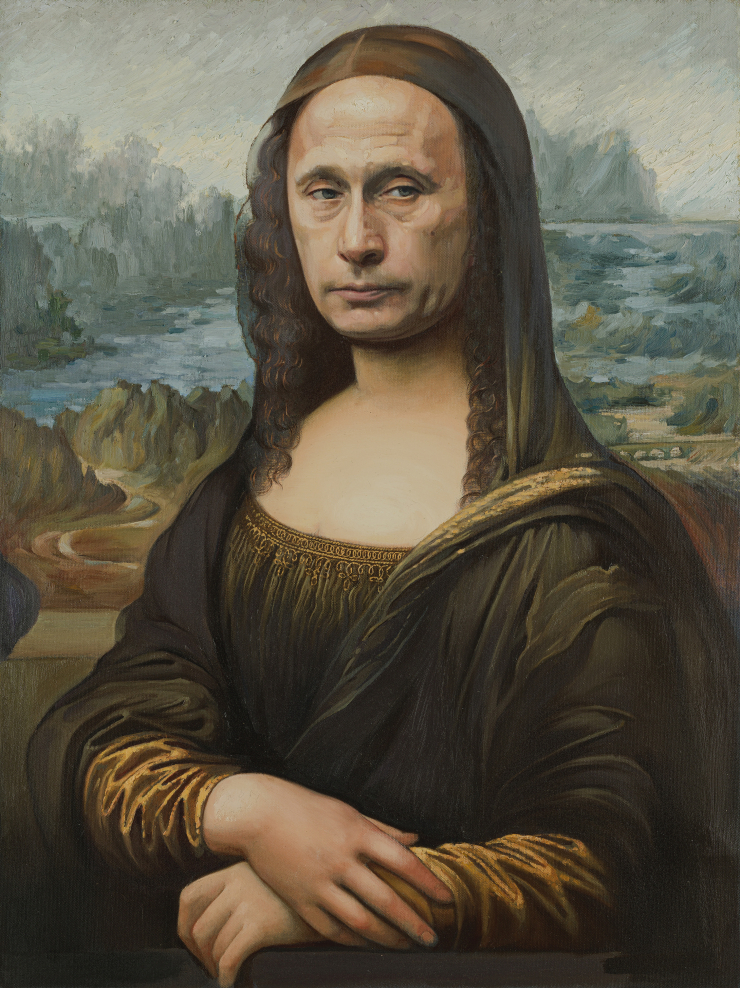 He went on to distinguish his work from that of Pop Art legend Andy Warhol, to whom he is often too quickly compared. “There is a film that Andy Warhol made that just shows him eating a hamburger and French fries. I think this was brutally straightforward way of saying that there is no escape, no exit from that reality. But in my case, and perhaps in the case of other Sotsartists like Komar and Melamid, we wanted to escape – and to provide viewers an escape – through irony.” In order for Kosolapov’s irony to work, that is, for it to create some reaction in the viewer, he has to hope that the viewer will also be able to decode the references contained within his art. “Umberto Eco wrote that an author must foresee a model of his possible reader in order to make his text communicable. I think my work is in this sense also based on the demands on the viewer,” Kosolapov said. For ‘Mona Lisa L.H.O.O.Q.’, the references are triple-coded, from da Vinci’s painting, to Duchamp’s play on gender when he drew a moustache on a Mona Lisa reproduction in 1919, and to Kosolapov’s own intervention. “Duchamp’s approach to art was always conceptual. In this case, he changed the gender and said that ‘she is he.’ I thought that in our time, we can also do ‘she is he’, but borrow an image from mass media.” Looking longer at the painting, I realized that Putin and Mona Lisa do occasionally share the same intense, vaguely smiling gaze. 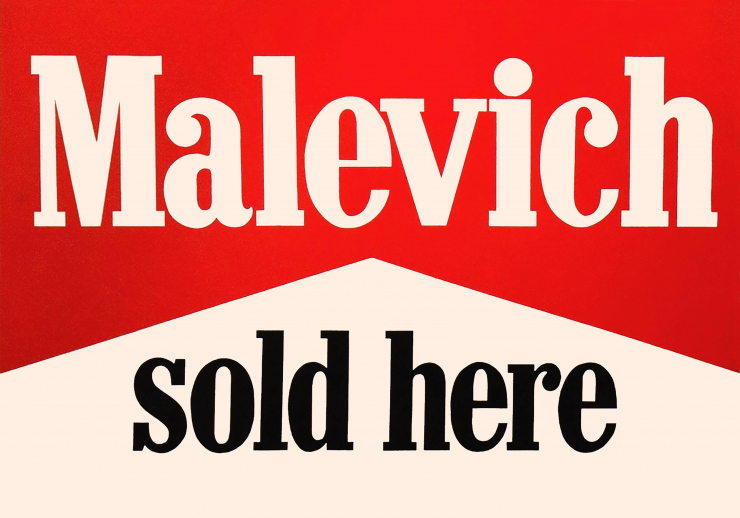